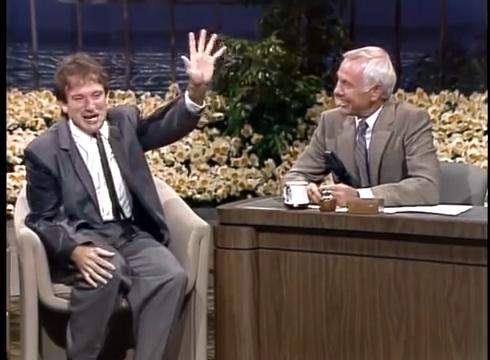 Spring Break is almost over! Thanks for sticking with me during this shortened period. I assure you I’ll be back next week with more of the fun you’ve learned to love and expect from Ponch’s Disco-Rama.

The final segment for this weeks’s No Comment Needed comes to us from The Tonight Show in 1984. Johnny Carson was king and one of his favorite guests was Robin Williams. Carson always appreciated his guests and would laugh along with all of them. But when you watch him with Robin Williams, he’s nearly in tears from laughing so hard for so long.

This was Robin Williams at his manic peak. Many have suggested that his hyper activity was primarily due to the use of numerous illegal substances. Williams admitted his previous cocaine addiction, but also claimed numerous times that John Belushi’s death in 1982 pushed him to sobriety. Williams and Belushi had been partying together on Belushi’s last night.

Either way, sober or not, this is vintage Robin Williams. And, as always, Carson knew enough to just let him go.

Enjoy! See you next week!

This site uses Akismet to reduce spam. Learn how your comment data is processed.